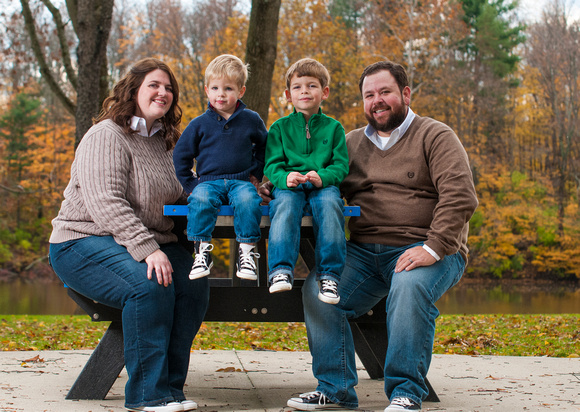 I had met Jeremy earlier in the year doing photos of his Scion and started doing more work for him thruout the summer. He phoned me and said he needed some fall photos of the family. we made arrangements for that Monday. It worked out I was sick Monday and we rescheduled for Friday well along comes Thursday, Halloween and a big line of thunderstorms so Halloween was pushed back till Friday you keeping up so far? So I met them on the West side of Indy so they didn't have such a far drive to get the kids home.

We met at a small park and used as much of it as we could to get some good shots of the family. Two energetic boys, one cheezin for the camera and one not wanting to have anything to do with the camera makes for some fun times. LOL. But we got some shots in, let the boys run in the park some to knock off some of there energy and got shots of them playing. It was a good time and we kept things short so the boys could get to Trick or Treating and so I could get home and take my kid out. All in all with the changeups and everything it worked out really well.